Thanks to everyone who contributed to the success of the carnival on Saturday, 15 June.
The winning float at this year’s event was ‘Man on the Moon’ entered by a group of Penygroes parents. The £100 prize will be donated by them to the Noah’s Ark Appeal for the Children’s Hospital, Cardiff. 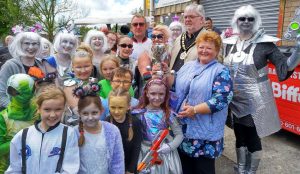 Second place and a £50 prize went to Gorslas PTA for their ‘Glastonbury’ float and the £25 for 3rd place was won by the ‘Cymru Am Byth’ float from Ffordd Werdd, Gorslas.
The winner of the ‘Guess the Cost of the Hamper’ was Gareth Jones with £28.35. The actual cost was £27.99.
The raffle was drawn by Beverly Owen and Angharad Price and the winning numbers were:

If you have a photo of an event in Gorslas please send it to this website so that it can be posted.